Fashion is back on the catwalk again, not only on the usual emblazoned catwalks but also in academic circles, and so it is that, on a Tuesday morning at the end of June, the collections of the students of the Three-year BA Program in Fashion Design paraded simultaneously on the Milan and Rome campuses of NABA, Nuova Accademia di Belle Arti.

“FASHION LANDSCAPES – The NABA Campus Fashion View 2022” tells the story of how fashion can be a tool capable of transforming and shaping the landscape in which it is immersed and brings to the catwalk 40 collections by the students of the Three-year BA Program in Fashion Design (30 from the Milan campus and 10 from the Rome campus). This year, at the Fashion Show, the collections were selected by a jury of NABA alumni, journalists, professionals and companies in the sector. All proposals were inspired by the concept ‘FASHION LANDSCAPES’ – a theme defined by Nicoletta Morozzi (NABA Fashion Design Advisor). The theme was then developed and interpreted by the students in three sub-categories: social (urban landscapes, tales of denunciation, which take into account the events of the socio-cultural scene), intimate (linked to inner, more personal landscapes) and environmental (the actual environment, linked to more concrete, less internalised and more externalised places). The outfits thus seek to interpret a condition of constant change, of contrasting signs, of physical and immaterial realities. Each of the creations thinks of fashion as a means of transforming geographical and interior scenarios.

The exceptionality of the event is also the fusion – for the first time ever – of the two physically distant fashion shows into one, combining the live and online experience, to bring the Milan and Rome campuses as close as possible. The layouts and itineraries of the fashion show spread across the spaces of two campuses hundreds of kilometres apart, where, however, the audience was able to enjoy the moments of the fashion show at both locations through screens. Guests in Milan were able to follow the fashion show in Rome, and vice versa. The aim was in fact to create an event capable of uniting the Milanese and Roman realities of NABA in a single spectacular show. Last but not least: the last element of dialogue was the live musical accompaniment, provided by the Saint Louis College of Music, which combined the sound of the fashion shows on the two campuses.

We at FARMA 282 have selected 8 designers from those presented (5 for the Milan campus and 3 for the Rome campus).

For Milan, we point out Samuela D’Onghia, who with her collection “The stars the great sad is a rebel who doubts” (styling by Ilaria Ghezzani) played on layering and the college/punk style revisited with maxi ties that are already on our wishlist. Weiren Theo, who grew up in Indonesia before moving to Milan, with his ‘Sarong Sunrise’ (styling by Intissar Bouhi) interprets modern masculinity by creating stimulating silhouettes through a conscious cross-pollination between Indonesian sarong and contemporary menswear. Marta Repáraz Lipperheide with her ‘Ex-It’ offers a collection that is very fascinating in terms of the fabrics used, the processing on them and the colour contrasts. Nicola Pinna with his ‘Foundation’ (styling by Margherita Data) brings a very interesting reinterpretation of the bustier/corset, together with the contrasting red ribbons with the leather and other fabrics used. Valentina Adenè with her ‘Hang Out’ (styling by Intissar Bouhi) presents a joyful collection, characterised by bright colours and the contrast/mix of ideally sportswear fabrics such as nylon with very romantic crocheted collars together with bunches of flowers held by the models. Her latest eye-catching release is a camping tent that can be worn as an outerwear. 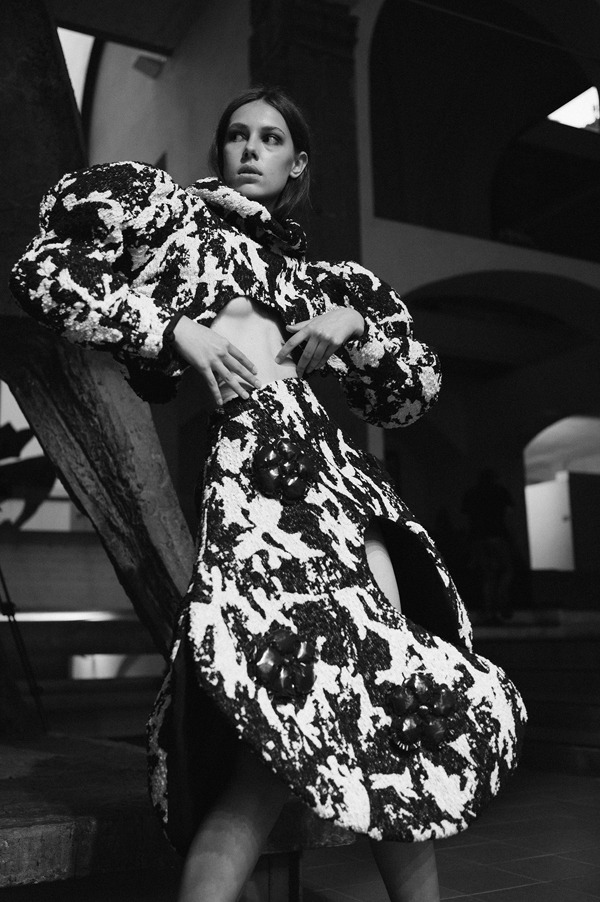 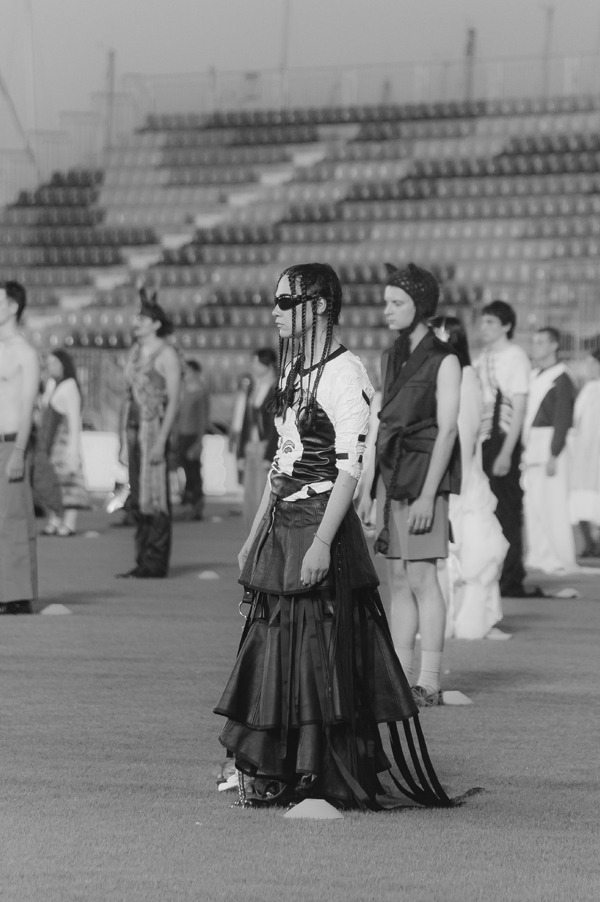